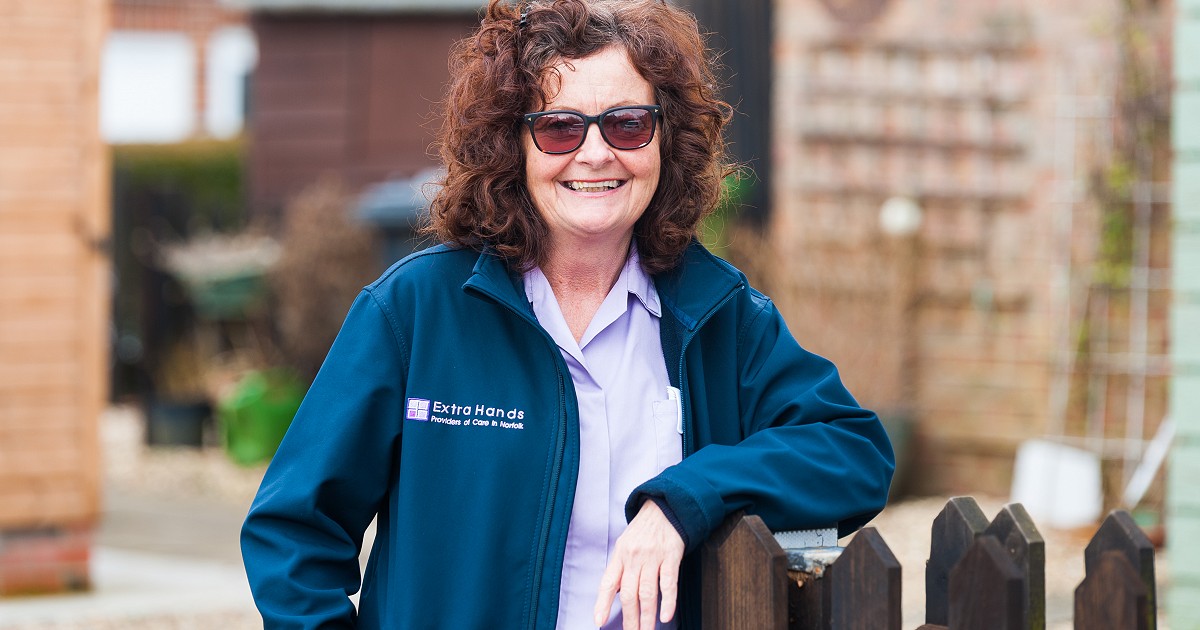 Carer Lorraine is an absolute gem

Carer Lorraine Childerley says she “would not change her job for all the tea in China” after receiving an award for the quality of her work.

Lorraine works from our Broadland office, and has had a long career in the care sector, having previously worked for Essex County Council for many years before moving to the area and joining Extra Hands two years ago.

She was nominated by service users for the latest GEM award, which stands for going the extra mile, because of the quality of the care and attention she provides, a role which she said had been transformed by events of the last 12 months.

“If you’re dealing with someone who has dementia, for example, and you have to wear a mask and they can’t necessarily see your whole face, that makes a big difference, so handling the nervousness of some service users, and trying to make them feel as safe as you can, has been a big deal in the last year,” she said.

“Going in with a smile on your face and a positive attitude each day, to reassure them, has been vital. I don’t think anyone outside the care sector appreciates how important domiciliary care is, but all that’s happened in the last year has made a lot of people evaluate their jobs, and think about what they could be doing to make a difference.”

Lorraine said her approach to work is simple; “treat the service user as another person, not someone with any vulnerability or disability, go into their house with a cheerful smile, and if you see something that needs doing, do it.

“I like to make cakes so sometimes I take them a bit, and if I see that they need a letter posting and can’t get out, I’ll do that for them. I always like to walk out thinking that I’m leaving their house how I would leave my own.”

She said it was a great feeling for her work to be acknowledged by her employers with an award, but no less than she would expect, based on her experience of working for the company.

“In a lot of jobs, you’re not valued, you’re just a job number, but Extra Hands really do make you feel like you’re a person who matters and is appreciated,” she said.

“I moved up here two years ago, and I’ve found them to be a great company to work for. If ever I’ve had any problems, they’ve always been there to support me personally, as well as in my work, and I feel that they go the extra mile themselves to support employees.

"That sort of support makes such a difference to how you do job. It’s so important to feel that you’re a valued member of staff, and here at Extra Hands, I am.”

The GEM Award winner from our Heacham office was Debbie Underwood following one nomination that said: "If the world had more people like Debbie, it would be a far better place."