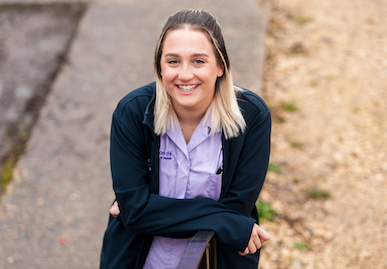 When your first day in your new job ends up with you passed out on the floor, it is safe to say the only way is up, and that is certainly the case for Tamara Proctor, who has been named as one of the first winners of our Rising Star award.

Tamara works out of our Heacham office and joined us last May, having previously worked in retail. Her start with the company may have been memorable for the wrong reasons, but in the subsequent months she has flourished and says she has now found her dream job.

“I still don’t know what happened that day – I wasn’t unduly anxious, I’d had a good breakfast and I was prepared, but I passed out completely,” the 20-year-old said.

“An ambulance had to be called and they said I’d probably overheated. It was a strange way to start – phoning the careline is supposed to be for the benefit of service users, not the carers, but I like to think I’ve made some progress since then!

“I absolutely love this job. I’ve had other jobs before where I felt happy, but that was mainly down to the environment of the people around me, but this is the first job I’ve had that I’ve felt genuinely happy to do.”

Tamara’s boss Lynda Hilliard said she had made a huge contribution since joining. “She’s settled into her role as if she has always been with us, even though she had no care experience before she came to Extra Hands,” she explained.  “Tamara’s service users are very pleased with her and she has made quite an impact on some of her regulars, who have said she is always lovely and cheerful.

“She also called us and gave us extra availability over the Christmas period for additional shifts if we needed her and is always helpful if we call her to help us out.”

The personal touch is clearly a big contributory factor to Tamara’s job satisfaction.

“Mixing with so many people makes me happy,” she said. “With my regulars, you build a relationship with them and they’re so happy when you go. If I’ve not seen them for a few days, when they say they’ve missed me, it’s wonderful to know I’m having such a positive effect on their lives.”

The last year may have produced many changes to many people’s lives, but as far as Tamara is concerned, it has all been good, and she would recommend others to follow in her footsteps.

“I’d definitely say if you have any interest in caring, whether or not you have any previous experience, then go for it, 100%,” she said. “The training you receive is excellent, and you won’t regret making the move.”

The other winner of the Rising Star award, from our Horsham St Faith office, near Norwich, is Trevor Wicks, who made the switch to caring last year after many years working running the Hollywood Cinema chain.

Office manager Hayley Claxton, who chose him, said Trevor had built great relationships with his service users, and was so settled in the job that he had recommended a friend to join the company.

Both winners receive vouchers and a trophy as their prize.