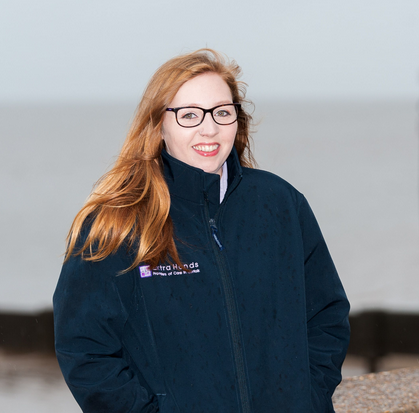 Events of the last 12 months have transformed millions of lives, and that is certainly the case for three of our carers who this month rack up their first year in the job – and what a year it has been.

Tamara Proctor, Natalie Ely and Trevor Wicks all came to the company from very different backgrounds and for different reasons, but one thing they do have in common is that they joined just as the pandemic transformed the role of care visitors, and made the job more necessary and high-profile than ever before.

Tamara had previously worked in a shoe shop, but the circumstances of the pandemic made up her mind to take a step she had already been thinking about for some time – and she has never looked back after joining the team on May 20.

“Growing up, I cared for my mum, and I’d seen how carers helped her, so when I saw what was happening with the virus, it seemed like the best time to get involved with a job that was a natural fit for me,” she said.

Satisfied care users have already seen Tamara named the winner of one of our Rising Star awards in her first year, which is all the more remarkable considering how she began her first ever shift – unconscious.

“I still don’t know what happened that day – I wasn’t unduly anxious, I’d had a good breakfast and I was prepared, but I passed out completely,” she said. “An ambulance had to be called and they said I’d probably overheated. It was a strange way to start – phoning the careline is supposed to be for the benefit of service users, not the carers, but I like to think I’ve made some progress since then!”

Fortunately she has settled into the role, and says her customer skills from the shoe shop, often dealing with older people, have proved invaluable.

“The job has been character-building,” she said. “When I used to go and see someone I didn’t know, I tended to worry a bit, but now I know it’s just part of the job, so I throw myself into it and I’m much more comfortable.

“I absolutely love this job. I’ve had other jobs before where I felt happy, but that was mainly down to the environment of the people around me, but this is the first job I’ve had that I’ve felt genuinely happy to do.”

Mum-of-two Natalie’s evening and weekend work fits in well with family life. She said joining Extra Hands on May 4 last year, during the pandemic, was coincidental.

“I’d umm-ed and ahh-ed about care work for a long time, and just happened to take the leap of faith when I did, but I’m so glad I did – it’s incredibly rewarding,” said Natalie, who, like Tamara, works out of the Heacham office.

With a background in retail and bar work, Natalie was not phased by the prospect of dealing with people, but did wonder if she could handle the potential emotional toll of the job. But a combination of growing into it and great support from management meant her first 12 months in the role have been a great success.

“In previous jobs, when I’ve been to talk to management I’ve felt like I was on tenterhooks but there’s absolutely none of that here, it’s like talking to friends,” she said. “I can’t fault my coordinator Sarah at all, she makes you feel so at ease and you can go to her with absolutely anything job-related.

“My main concern was that if you hear someone’s not well, or been taken to hospital, I’d get too attached, but I’ve learnt to give my all at work, and then not take it home with me.”

Trevor came into caring from a very different background, having run the popular Hollywood Cinema chain in Norfolk for many years, before a total change of career saw him become a carer, based at our Horsham St Faith office, near Norwich, on May 22 last year.

As unlikely as the switch may have sounded when he announced it, it has worked, as he too, like Natalie, has already won a Rising Star award for his efforts, and Trevor gave the experience – and Extra Hands – a five-star review.

“When I put on Facebook what I was doing, people were amazed at such a total about-turn,” he said. “I wasn’t sure if I’d like it, but when you go to somebody’s home, you may be the only person they see that day," he continued. "I look forward to going to people’s houses and doing some good for them – how many jobs can you say that about?”

As a former employer, the switch to being an employee could potentially have been a challenge, but Trevor said our management team had made the process plain sailing.

“I chose Extra Hands because I didn’t want to work in a home… and it’s a family-run company, so that was something I could relate to, and they’re great people to work for,” he said.

Few people could possibly have imagined how so many lives would be transformed by events of the last year, certainly not Tamara, Natalie and Trevor when they joined us. But thanks to their efforts, and those of our many other wonderful staff, we and our care users have come through it in good shape, with a positive outlook for future after such a long period of darkness.

“If I had a pound for every time I’d heard someone say 'that’s great, but I could never do it', I’d be a very rich man,” said Trevor.  “My friends tell me I’m a lot happier now, doing this job. If I can do it, anyone can!”