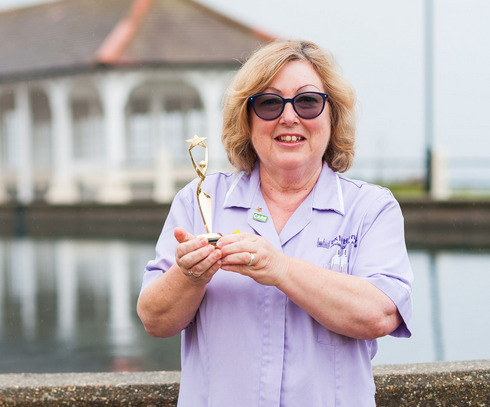 There’s no doubt Sue Symington is willing to go the extra mile - as that is the distance she walked to make sure she could deliver care after her car broke down.

Her dedication has now been recognised with a GEM award, which Extra Hands launched as an opportunity for service users and their families to nominate their favourite carers in recognition of their hard work.

Sue, who works out of our Broadland office, was highly praised for her kindness and compassion.

“Sue was the person closest to my husband in the final two years of his life, it is a huge comfort to me to know that he wasn’t just her ‘7:30 client’ and that for her, the work she does is obviously so much more than ‘just a job’,” said one nomination.

“Her visits were never rushed and her attention to detail made us feel like she was one of the family, and that made dealing with various problems and issues over the two years so much easier.

“On one occasion, Sue went the extra mile in the most literal sense of the term: her car broke down and she walked a mile and a half to keep her appointment with us and not let us down!”

Sue, who lives in Lower Southrepps, told how the car breakdown had happened on an autumn day after she started her appointments.

“I’d been to my first service user, my car was absolutely fine - but then I couldn’t get it to start, it wouldn’t do anything,” she said.

“The gentleman didn’t cope with change very easily, so it was important that I got to him if could rather than have someone else going that he wasn’t used to. So I took the basics that I needed and walked to him.”

Another letter of nomination also praised Sue for going beyond the call of duty.

“She is always smiling, nothing is too much trouble, she brings help and happiness into my wife’s life with more than special care which helps my wife with her several illnesses,” it said.

Sue, who has been with us since 2014, said one of the most rewarding aspect of the job was the feeling of making a difference to people’s lives.

“It is nice to know when you leave them you have done everything you can to set them up for the day,” she said.

"You also learn so much from people - I am a much better gardener now as I get gardening tips all the time, I am am much better florist now as I get tips on how to arrange my flowers, I am a better cook as I gather up recipes. You learn a lot and you hear such fantastic stories - you hear funny stories and you hear incredibly sad stories. But all of that just makes you a richer person.

“It is an absolute pleasure and privilege to have a snapshot of time with people.”

Sue added winning the GEM award was particularly appreciated as the nominations come from service users.

“It is nice they take the trouble to do it, for them to take the time is really lovely,” she said.

The GEM award winner from our Heacham office was Sharon Newman, who was praised for being “a fantastic, kind, caring person who offers a great deal of respect and kindness.”