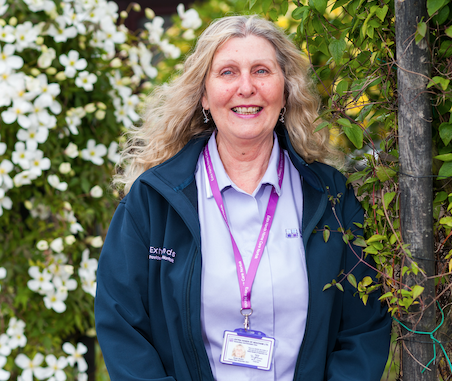 From home improvements to home care

A background working for a leading DIY chain might seem like an unlikely preparation for a career as a carer, but 10 years ago that is what Sue Brydon was doing before she joined our team, and one decade on, it is a switch she has never regretted.

Problems caused by a leg injury made her consider other employment options, and Sue looked at the job of her sister, who had at that stage already worked for us for five years, and who retired last October after 15 years of service. She followed in her footsteps, and found the transition fairly straight-forward.

“I’d had a bit of care experience looking after my father when he was unwell, and a lot of my customer skills from retail proved useful,” she said. “Being able to communicate with people and handle them if they’d ordered a bathroom and it hadn’t come through as they wanted, or something like that, was a useful training for going into people’s homes and learning how to help them.

“I was a bit wary at first, but once you’ve been to see someone a couple of times and worked out what they like and don’t like, they’re not strangers any more, they become your regulars, so you just get on with the job.”

Although Sue has been a team member for 10 years now, the pandemic means that this time could just as easily be described as nine years - and then the last one.

“It was a bit frightening at first, and it was particularly hard on some people with dementia, who might not really understand what’s going on, but most of them were ok about it,” she said. “We have lots of PPE, and most of the people we go to see are on their own anyway, so in fact our job is probably safer than working in a hospital.”

Sue works out of our Horsham St Faith office, near Norwich, and said that as well as the standard of care provided to service users, the care we give to carers was of the highest level.

“I’ve never found any issues where I haven’t been helped,” she said. “We’re very well trained, and if you ever have a problem, you can get help. It’s a very well coordinated place, we all get on well and work well together.”

Ten years down the line, Sue is clearly happy with her choice, and would urge other people to consider doing the same.

“I thought washing and dressing people would be an issue for me, but it’s not, it’s just part of the job,” she said. “People say ‘I couldn’t do what you do’, but with training you can and I think a lot of people would be pleasantly surprised by how they’d enjoy the work if they gave it a try.”