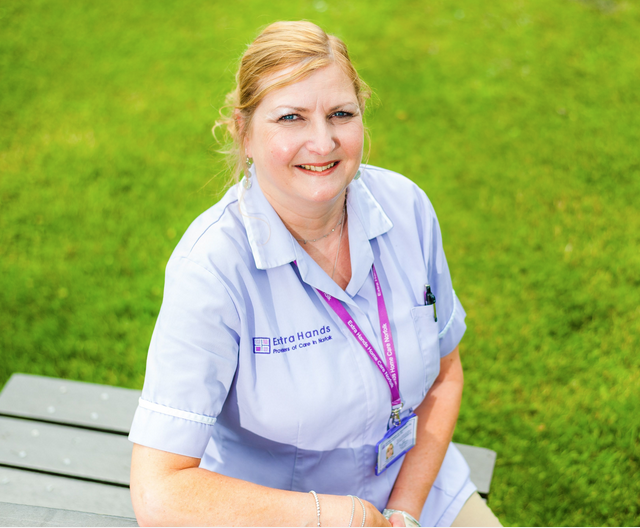 High-fives all round as GEM winner Sharon celebrates anniversary

One of our recent GEM award winners has another reason to celebrate after clocking up her fifth anniversary as member of the Extra Hands team.

Sharon Crater won the Broadland branch award for Going the Extra Mile in the course of her duties, and this month the former nursery school worker marks five years since she joined us, a move she admits was a bit of a gamble, but one that has paid off in spectacular fashion.

“When I joined, I wanted something totally different, and it took a few months for me to adjust, but once I was confident, I began to really enjoy the work and the company,” she said.

One of the reasons she said that she, like so many other long-serving staff, has stayed with us is that despite the company’s great expansion and growth over the years, it has not lost touch with its values, and neither have the people who run it.

“It’s a hard job, but the people who run the company know that, and they really appreciate your work,” she explained.

“If there’s a big turnover of staff at any company, you know they’re doing something wrong, but here, people like to stay, which is a sign that the company is getting things right. The management want to know their staff are happy, that matters to them.”

The last five years have flown by, Sharon said, and she hopes that in another five years, she will be celebrating another anniversary with us.

“I’d certainly like to think so, I’ve no plans to go anywhere else,” she said. “I can’t believe how fast the time has gone, but I love the work and I would definitely recommend the company too,” she said. “Once I was settled, I fell in love with what I’m doing, and I still am.”