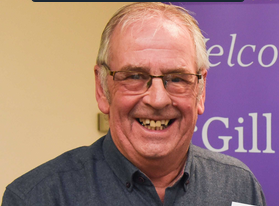 "John treats us like a member of his own family"

We are meeting all the shortlisted nominees ahead of this year's Gill Chase Award, which will be announced on December 11. They have all been put forward for special recognition for their hard work and dedication in the annual event to celebrate our fantastic staff.

Retirement is a word John Thompson isn’t familiar with, despite the fact he could have put his feet up several years ago.

After more than 15 years with Extra Hands, there isn’t much he hasn’t seen but he still loves to be working at the age of 73 - although he doesn’t really think of it as work at all.

“I had a job, but this isn’t a job really. I love meeting the people and helping them,” he said.

He was formerly a managing supervisor at a large factory, but he said the skills he had in that role were not too different from those needed to be a good carer.

“I often had people in my office and you had to be a good listener and keep calm, if you were making someone redundant or telling them what to do. Listening is very important,” he said.

John works all weekday mornings and isn’t planning on stopping the role he loves any time soon.

His nomination highlights his years of experience and his listening skills working out of the company's Broadland office.

“We always look forward to his visits and we feel he enjoys our company as well. He treats us as he would a member of his own family,” says his nomination form.

“John would also go the extra mile. I cannot fault his willingness to provide the best service he could.”