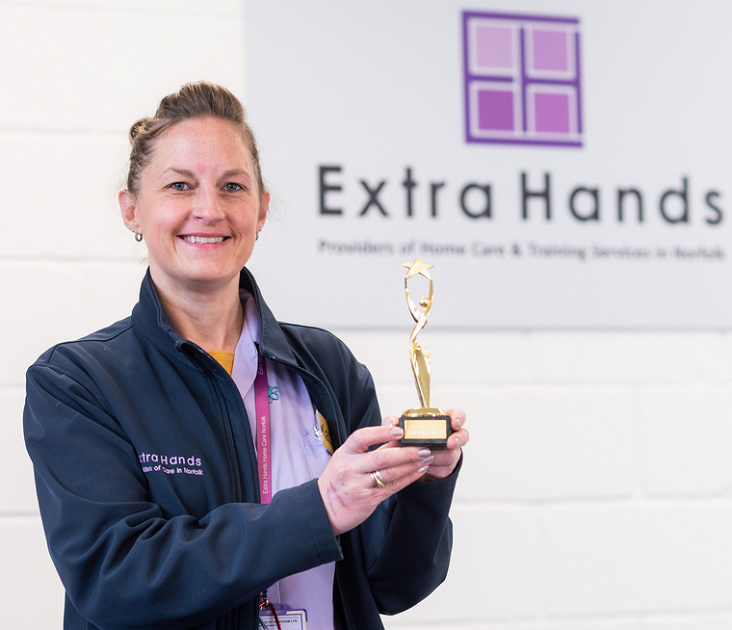 Kate's 'gentle and caring' approach makes her a GEM

For Kate Davis, the reward of her job as a carer is being able to put a smile on people’s faces - especially at times like Christmas Day.

Now her dedication to her role has earned her a GEM award - which Extra Hands launched as an opportunity for service users and their families to nominate their favourite carers in recognition of their hard work.

Kate, who has worked with us for nine years, was nominated for being “cheerful, friendly and approachable”.

Her gentle and caring approach was praised for being able to help turn around even bad days for services user with dementia.

Kate, who works out of our Broadland office, has been a carer since she left school.

She said: “I was really shocked when I got told and really pleased about it as well.

“I have worked in care a long time and I love caring for people, I love making a difference to their life. Some people don’t see anyone from day to day apart from the carers and it is nice to be able to help them.

“It is a lovely feeling to know you have put a smile on someone’s face and you have helped them with their daily living and made a difference to their life.

“It is very rewarding, I love it.”

The 41-year-old said  she was happy to carry out visits on Christmas Day, which included some festive dressing up in a Santa hat or reindeer ears.

She said: “That puts a smile on people’s faces and gives them a bit of a giggle.

“It is rewarding to be working at that time. Sometimes they only people they will see is us so it is nice to be able to sit down and have a chat, maybe a cuppa with them, just have that little bit of time with them.”

The nomination for Kate came from the daughter of a service user, who wrote: “She is very much in tune with mum’s needs regarding her dementia and has no problems dealing with mum, despite mum being stubborn and difficult sometimes.

“Occasionally mum has days when she does not want to get out of bed. It can be difficult to persuade her despite lots of encouragement.

“But when this happened recently at one of Kate’s morning calls she persevered with mum, took her breakfast in bed and this gentle, calm approach eventually led to mum agreeing to get up, washed and dressed. An amazing turn around from the stubborn attitude Kate was initially faced with. Kate is consistently professional in her work but has a gentle and caring approach.”

Kate said she was “shocked and please” to have won the GEM award.

She said: “There are so many rewarding moments, for example, you are able to take people out for shopping and that is their weekly day out.

“I love chatting to people and helping people, especially with dementia. It is just a great job.”

The GEM award winner from our Heacham office was Hayley Handley-Hicks, who was put forward for the accolade for her calm and efficient manner when helping a service user after he had a fall.