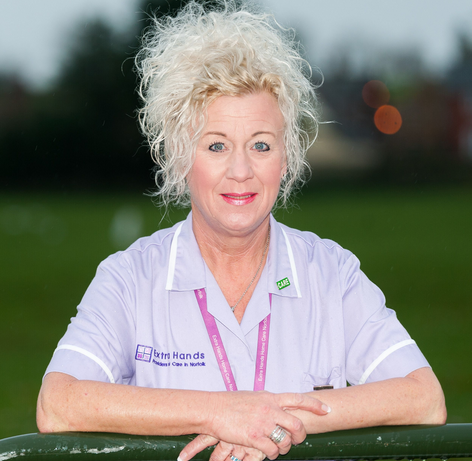 Leap of faith pays off for new Extra Hands staff

The dramatic events of the last 12 months will ensure that 2020 is remembered by many people as a life-changing year, for many different reasons, and in few places as much as in the care sector.

A surge in demand for home care services has seen Extra Hands take on many new staff, all of whom have gone on their own journey of personal and professional discovery in their new job.

One such new starter is Amanda Hathaway, from Dersingham, who works out of the Heacham office. Having spent years working as a mobile hairdresser, the 53-year-old saw that stopped in its tracks by lockdown.

She had always been tempted by a career in the caring professions, so when fate forced her hand, she made the leap of faith – and has never looked back.

“It’s something I always wanted to do,” she said. “I’ve been a hairdresser since I was 16, most recently a mobile one, and a lot of my customers tended to be older and I’ve ended up doing extra things to help them anyway.

“I had thought about trying caring when I was a bit older, but when COVID shut down home visiting, I thought it was time to make the move now.”

One thing that can be challenging for new carers is getting used to going into people’s houses, but this is one field where Amanda’s previous work experience has proved useful.

Despite having relevant transferable skills, changing employment after so many years can be a challenge, and Amanda admits it was a daunting step, but one she is now very glad she took.

“Hairdressing comes naturally to me, it’s been my life since I was 16, so to do anything else was always going to be a big step,” she said. “Training for something new at my age is a bit of a challenge and there were times when I thought I might not be able to do it, but the company always helped and encouraged me.

“Now, I absolutely love being a carer. Making the users happy and leaving them safe, with a smile on their face, is the best feeling”

Another career changer is Laura Hawksworth, who decided to change from a career in admin roles

“I knew admin wasn’t really for me, and years ago I had done some care work and enjoyed it, so the thought of doing a job where I could go into people’s homes and help them as they needed was something that really appealed, as people have told me I have a caring nature,” she said.

“It can be odd going into someone’s house, but once I’ve done that and got to know the place and person, I really enjoy it.”

Laura, from Kings Lynn, works three evenings a week and alternate weekends out of the Heacham office, and said this pattern had helped her settle in the role quickly and develop her skills.

“Working like that allows me to go away and think about what I’ve done, which has helped me get used to it,” she said. “Extra Hands were very helpful in the way they didn’t throw me in at the deep end, they gave me a couple of clients to start, and it’s built from there, so that’s really helped me get into the role and feel more comfortable doing it.”

One skill that Laura says has proved useful from her previous jobs is realising the importance of listening, and how beneficial that can be for all involved.

“If you let people talk to the end of what they want to say, they feel so much better that you’ve actually listened to them, and their needs end up being identified and sorted much more quickly,” she said. “That’s something that’s really valuable when you’re trying to build a caring relationship.”

Working evenings means Laura is often the last person her clients see at night, which she said is particularly rewarding.

“Probably the greatest satisfaction I get from it is coming away knowing that I’ve set them up for the night, they’re comfortable and they know that someone will be available if needed,” she said. “Knowing I’ve made them feel reassured and secure is the best thing.”

Events of recent months have been beyond the imagination of anybody, but having taken the plunge at such an unpredictable time, Laura said it was a move she was very glad to have made.

“The last few months haven’t been easy for anyone, and I think it must have been very challenging for Extra Hands to juggle all the demands on their services, but they’ve done a great job,” she said. “Whenever I’ve had a concern, they’ve been very patient and I’ve felt supported. I feel my skills are really suited to this – I’m really happy with this job.”