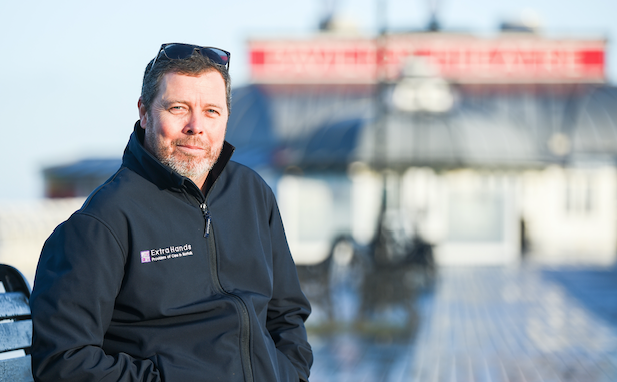 With a background of caring, Mark has been awarded the December GEM Award for our Broadland office.

Mark has been with us for three years but has a solid background in the caring sector as he previously worked with adults and children with learning and physical disabilities.

He was also a house husband when his children were younger and joined Extra Hands three years ago having undergone open heart surgery at the renowned Papworth Hospital in Cambridgeshire when he was 53.

The Cromer father-of-four was genuinely surprised to be told he was the Broadland office’s Going the Extra Mile winner for December - and says he even felt a bit guilty.

“I was pleased and like all of us, it’s lovely and very kind of people, but you do think of all your colleagues and feel guilty really, they all work just as hard,” he said.

The 56-year-old has been working hard during the most difficult of years, and says he is looking forward to his service users being able to get vaccinated against Coronavirus in the very near future.

“The hardest thing for most of them has been missing their families. They are all really looking forward to having the vaccine and getting a bit more back to normal,” he said.

“Most of our service users have been pretty OK during the pandemic. It has had an effect on those who have dementia - mostly because their routines are disrupted and they don’t understand why.”

Married to Kaye, Mark has always lived in Norfolk and has been in Cromer for around 40 years.

He became a carer with Extra Hands in a switch from his previous role after he visited his grandmother in hospital many years ago and thought there had to be a nicer way of looking after older people.

“It was a long time ago, but it wasn’t great and I thought I would like to do something which would help older people,” he said.

Our Heacham office winner was Daniela