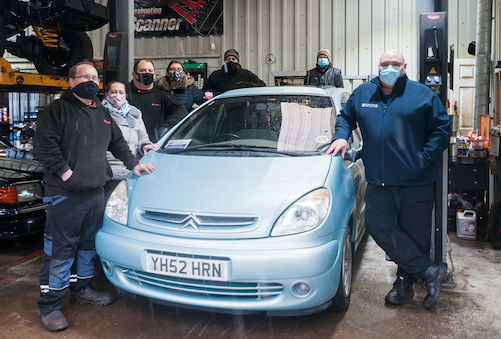 Generous garage helps carer Tony get back on the road

The heartwarming support of a Norfolk garage to a carer who ran into trouble when his car let him down has lit-up social media.

Tony Lasham was in a muddle when his old car needed urgent repairs but he didn’t want to let down his clients who rely on him on a daily basis, particularly over lockdown.

After making several calls in a desperate bid to have his car fixed in time for his evening rounds, he contacted Silver Service.

Not only did the South Raynham business, owned by brothers Ronny and Stephen Silver, repair the brakes - but also fixed a long-standing issue which had seen Tony with no heating in his Citroen for two years - and they never charged him for that repair.

Tony found his car was leaking brake fluid last Monday (16) morning and worried that he would be left with no vehicle if he could find someone to fix it.

“I called Silver Service and they said to bring it in. I had to tell them I was working Monday night - but they said I could use a courtesy car if they couldn’t repair it. I turned up three hours later and received such a lovely welcome - they told me not to panic about work as they had a car for me to use.”

His aging car also had a complicated electrical problem with the heating which didn’t work and Tony had been told couldn’t be fixed. He was delighted the courtesy car the Silver brothers loaned him would be warm as well as working.

“I was telling them to take their time because it was the first time in two years  I had a car that had heating and it was brilliant. I have metal femurs in both legs and struggle with the cold weather. After driving their car I thought I needed a better car as my own health was suffering because of the cold and damp in mine. I really didn’t want to give their car back.”

But Ronny and Stephen Silver not only gave him a courtesy car so he could carry out his rounds, but without being asked they repaired the heating fault free of charge so Tony’s car is warm and dry for the winter.

“I went to the garage, met the lads, paid the bill and Stephen gave me the keys to my car. I got in and I can’t believe what they have done - they fixed my heating and said it was a thank-you for all the care work I do and they couldn’t see me without a heater.

“I drove out feeling overwhelmed  and did get emotional for a big fella. I told Extra Hands and we all wanted to say thank-you to Silver Service and all the staff for showing such love and compassion and being the silent heroes you all are.”

When he posted his story onto a Fakenham community Facebook Page - the response was huge - with more than 1,500 people reading the post and hundreds sharing it and praising the Silver brothers for their generosity. One even suggested the business should now be ‘Platinum Service’.

Tony is a dedicated and compassionate carer and for someone to do something so nice for him is such a lovely gesture.