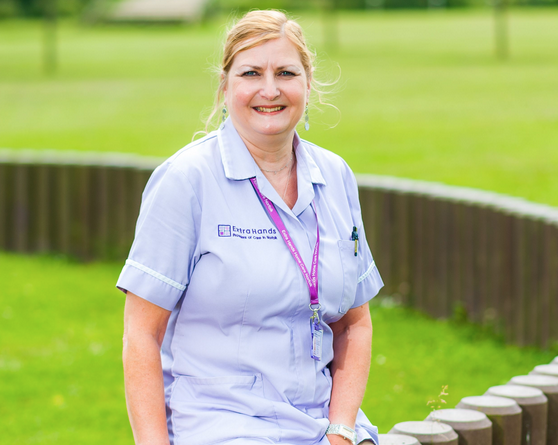 Switching from one end of life to the other might sound like a big leap, but it is one that has paid off for former nursery nurse Sharon Crater, who has been named as the latest Broadland branch winner of our GEM award, for staff who go the extra mile.

Sharon is coming up to her fifth anniversary as a team member, having previously worked as a nursery nurse and a childminder, and said she was inspired to make the switch by helping out an elderly neighbour, and seeing the difference carers made to his life.

“At the time I was working in a nursery, and before that I’d been a childminder, so in some ways, the job requirements are similar, but at the other end of the age scale!,” said the 51-year-old. “I didn’t know if I’d like it, but I fancied a change so I thought I’d give it a go, and the biggest surprise has been how much I loved it - and continue to do so.”

Sharon said the job was a continual learning process, never more so than in the circumstance of the pandemic. “One thing I’ve found out is that I’m a calm person and can handle situations maybe better than I expected I would,” she explained. “I don’t rush service users, I like to keep them relaxed, and sometimes you need to do that with the families too, if they’re struggling.”

Her care users would certainly agree, with one even going so far in her nomination letter as to call her a miracle worker. “Many a time Sharon has miraculously managed to get Mother motivated enough to get up and have a shower, when I thought she stood no chance of achieving this,” the letter said. “Sharon is always very cheery and there is very often a marked improvement in Mother’s demeanour after Sharon has completed her visit.”

The pandemic has not just changed the role of carers, she said, but also the perception of the job. “Domiciliary care in particular wasn’t up there before, but without people couldn’t stay in their own homes, so I think now it’s more valued - I certainly hope it is,” she said. “People now realise there’s more to what we do than just having a cup of tea and a chat.”

Whilst Sharon is naturally delighted to have received the award, she said doing her job well is the best reward.  “It’s nice to feel you make a difference to the care users,” she said.

“Sometimes you turn up and you can see that they’re down, so you do something as simple as take them out to the garden to look at the flowers. Even something like that can change things.”